Facial hair is becoming increasingly popular, and you may be considering a beard yourself? 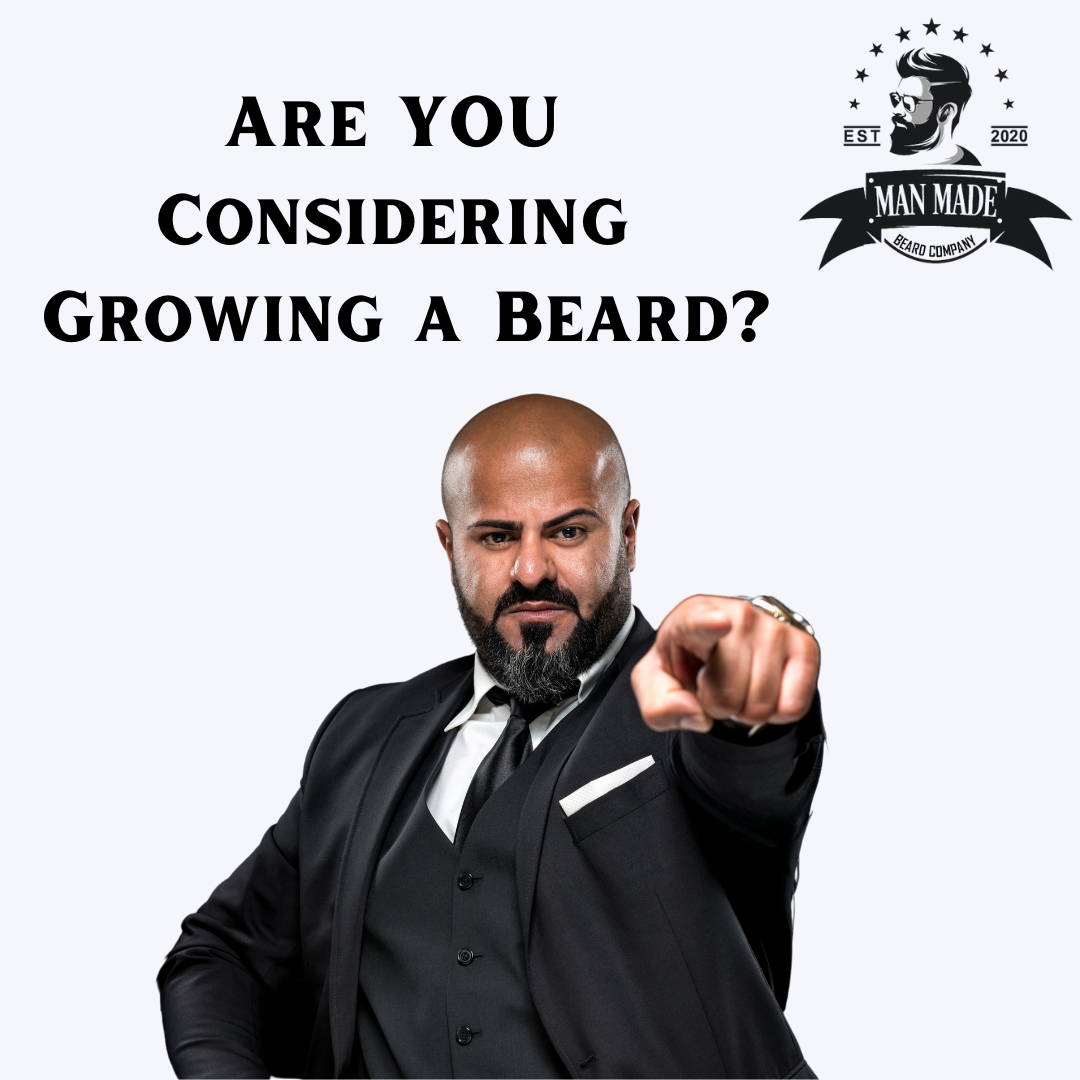 In this article, we wander thru some background topics for people who either already have a beard or moustache, or those currently considering making the move. If you are really interested in learning more about growing and maintaining a beard, you should check out the rest of the Man Made Beard Company website.

The site is fully packed with vast knowledge on the topic of beard care knowledge and we offer an unrivalled beard care product range and expertise.

So, what is it about humans that makes a beard so special?

People have often wondered why beards exist, using scientific techniques to try and explain it, but the reality is that facial hair has no biological function.

Other types of hair have specific functions and have developed as part of evolution and had some function that was advantageous to the individual.

Our head hair shields our heads from the sun and provides insulation in winter. Our pubic hair protects sensitive areas. Beards and moustaches, however, seem to be mostly for the masculine beard style of man.

A way of expressing ones personality with facial hair.

It also made a cameo appearance during the start of the COVID pandemic in Japan.

In 2017, the Centre for Disease Control and Prevention (CDC) released an infographic showing which facial hairstyles were acceptable when wearing a standard respirator or N95 mask and which styles were less acceptable because they "crossed the seal," allowing all manner of nasty little things access to your wide-open mouth.

It had thirty-six different designs, including fourteen moustaches, twelve beards, nine beard-moustache hybrids, and a clean-shaven option, among other things.

Why do we have facial hair at all if that is the case?

Scientists aren't certain. When you take a step back and survey the big picture, they have come up with the best evolutionary prediction that makes a lot of sense.

As it turns out, facial hair is not a physical human attribute in the manner that we previously believed it to be over a long period of time. It's purely a sign of personality, showing of your beard types to the world, also it shows that your alpha of pack!

Facial hair is the only physical characteristic of the human body that is solely or mostly decorative, as opposed to the rest of the body's physical features, which include various types of hair.

To put it another way, it doesn't perform any kind of specialized physiological role at all. Simply consider what the rest of our hair does for us:

Hair on the body

Body hair aids in the control of body temperature.

Hair on the top of the head

Head hair not only shields your scalp from the sun's rays but also acts as a heat trap if you live in a cold-weather environment..

When the eyelashes are open, they act as screen doors for the eyes, keeping bugs, dust, and other small debris particles out.

Sweat is prevented from going into your eyes by raising your brows.

Armpit hair is a kind of hair found in the armpits. While armpit hair, which is technically referred to as "axillary" hair, is responsible for collecting and disseminating pheromones, it also serves as the WD-40 of body hair, reducing friction between the skin on the undersides of our arms and the skin on the sides of our chests as we walk and swing our arms.

A layer of protection from germs and other pathogens is provided by pubic hair, which also serves to minimize friction and protect against infection.

What about facial hair?

Interestingly, it is not included in that helpful list of adaptive hairy features, which you can see from above.

Evolving biologists speculated that it could have thermoregulatory or prophylactic properties comparable to those of body hair and pubic hair during the early stages of their research.

After all, beards and moustaches are located near the mouth, and the mouth is the entry point for food and other particles that may cause illness.

So you want to ensure your maintaining the best beard care routine for you.
Ensuring using only the best beard products uk, to maximise your daily beard routine to promote a healthier, fuller & even cleaner beard.

Hair is also found on the face, which is related to the head, which loses a significant amount of heat via its top if it is not covered by hair. When you think about it that way, everything makes sense.

Natural selection does not work this way.

However, there is a massive hole in this theory: it fails to account for half of the population, i.e., females. Natural selection is brutal, and it has driven numerous species to extinction, including the dodo bird.

Rarely, if ever, does evolution select for a characteristic in a species and then abandon half of the population, particularly the half that produces all of the offspring, to struggle to survive (i.e., the most important half).

If facial hair were intended to fulfil significant roles, it would be present in both sexes, no matter what their gender. Instead, thick, mature facial hair is found nearly solely on the male side of the species, and its only function is to sit on the wearer's face and serve as a signal to anybody who happens to come across him.

What is the message that facial hair conveys?

This is where things get a bit complicated: "The two most common theories for male facial hair are intersexual attraction (drawing female attention) and intrasexual rivalry (intimidating competitor males)."

Basically, facial hair communicates one thing to possible lovers (specifically, virility and sexual maturity) and another thing to potential competitors.

The hard man beard collection really suits this, being the alpha male of the pack!
Cedarwood & Tea Tree beard oil is certainly a masculine beard scent, making it one of the best beard oil uk.

When taken as a whole, these signals impose a distinct level of increased prestige on the guys who sport the most magnificent moustaches or the largest, most imposing beards on the planet. 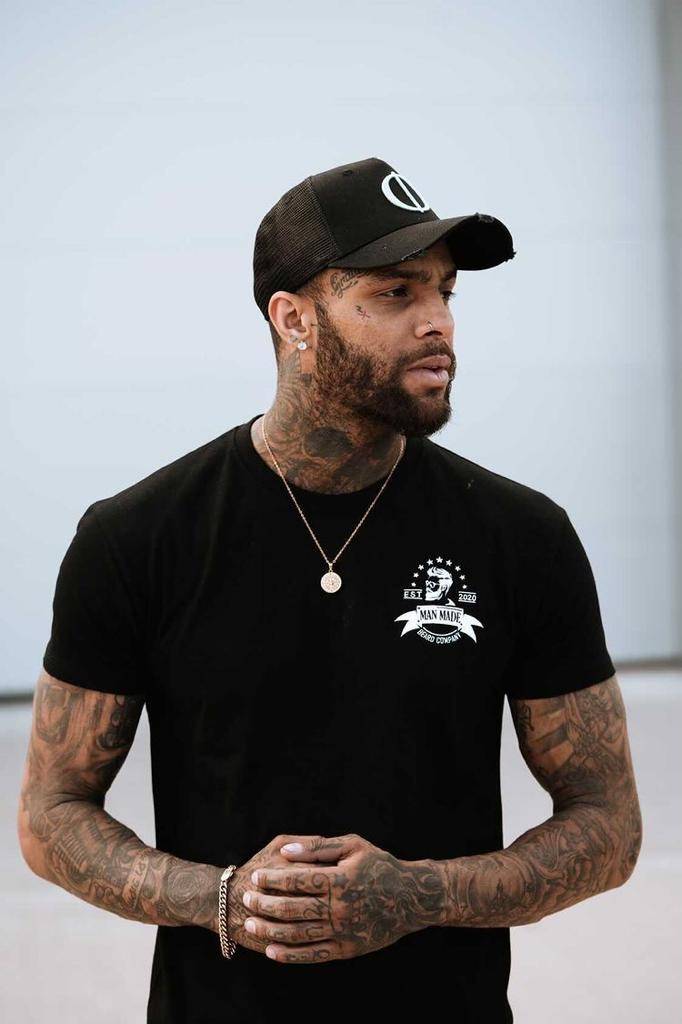 If you speak with evolutionary scientists, they will tell you that although some girls are attracted to facial hair, while others are not, and others couldn't care less about it, the majority of the time, female attractiveness is influenced more by the population density of beards in a certain area than anything else.

So beard fashion, its certainly a thing!
Rocking the best bearded clothing, having our own Man Made Beard Clothing range of Man Made Bearded Hoodies, Beard Tee Shirt, Beard Hats & Beard Beanies.

This is referred to as "negative frequency dependence" (NFD) in evolutionary genetics, which is scientific jargon for the concept that when a feature is uncommon within a population, it has a natural advantage.

Male Koi, for example, who have a unique mix of colourful spots, mate more often and are preyed upon less frequently than other males. This represents a significant competitive advantage.

The disadvantage is that, because of all the getting-it-on that the highly interesting-looking Koi Carp does, the competitive advantage might result in a rapid overpopulation of others with the same feature, which means that the Koi loses its uniqueness and becomes more common as a consequence.

In addition to explaining the variation in the attractiveness of facial hair from community to community, this back-and-forth between common and rare explains why the leading explanation for the evolution of facial hair has started to settle around intersexual rivalry in recent years.

Because it is not sufficient to merely be beautiful; you must also be more appealing than the people around you, and in a sufficient number of the appropriate ways, in order to stand out. This contributes significantly to our knowledge of how the popularity of facial hair has ebbed and flowed throughout time.

Evolutionarily speaking, growing a killer Moustache or a bushy beard is only beneficial for as long as it continues to distinguish you as a member of the hottest new guppy craze going around the pond. When it makes you seem elderly, shaving becomes the most effective method of removing hair.

It's Not Science, It's Beard Fashion.